My two sons, ages 14 and 17, enjoy long-distance backpacking trips that immerse them in true wilderness, miles from other people. This July they participated in a 6-day, 55-mile backpacking adventure with members of their Boy Scout troop. They traversed parts of the Umatilla National Forest and the Tucannon-Wenaha Wilderness in a remote area near the Washington – Oregon border. Here’s the route: 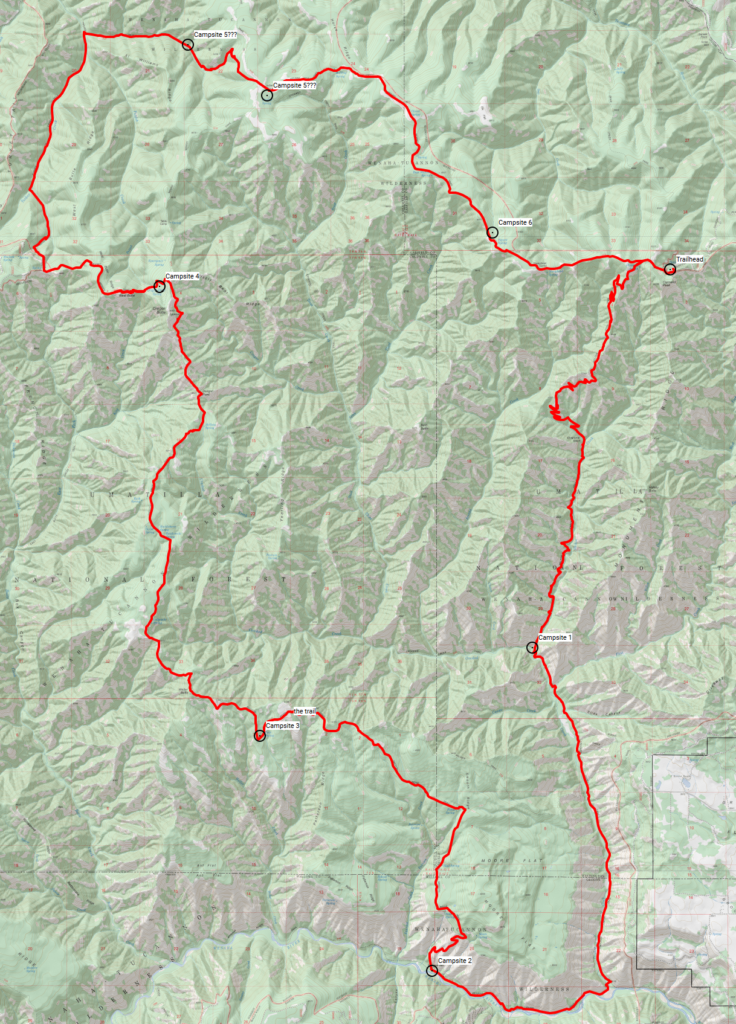 Their group of ten Scouts and two adult leaders only saw two other people the entire trip. On the one hand, I am thrilled that they regularly seek this sort of connection to the wild and to solitude, especially given the always-connected world in which they are growing up. On the other hand, like any parent, I have pangs of anxiety every time they disappear into the great outdoors, beyond the reach of any sort of normal communications.

I was therefore very pleased to learn that the group would be carrying a “Gen3” device made by SPOT, because it attempts to strike a delicate balance—providing modern-day trekkers a way to get help if they need it and to reassure loved ones who aren’t in the backcountry that those on a trip are doing fine, while being as unobtrusive as possible. SPOT advertises the device this way: “You can summon for emergency assistance in dire situations, send messages to give others peace of mind and track your unforgettable routes—all outside of cellular range.”

On the final day of the trip, I knew the group might decide to skip the last campground and push through to the trailhead. That would get them off the trail in time for a hot meal and indoor lodging that evening and an earlier arrival at home. Curious to see what they decided to do, that day, I (justifiably, I thought) watched the progress more closely than I had up to this point. Here’s what I saw about midday—the route is on the left and the SPOT tracking on the right: 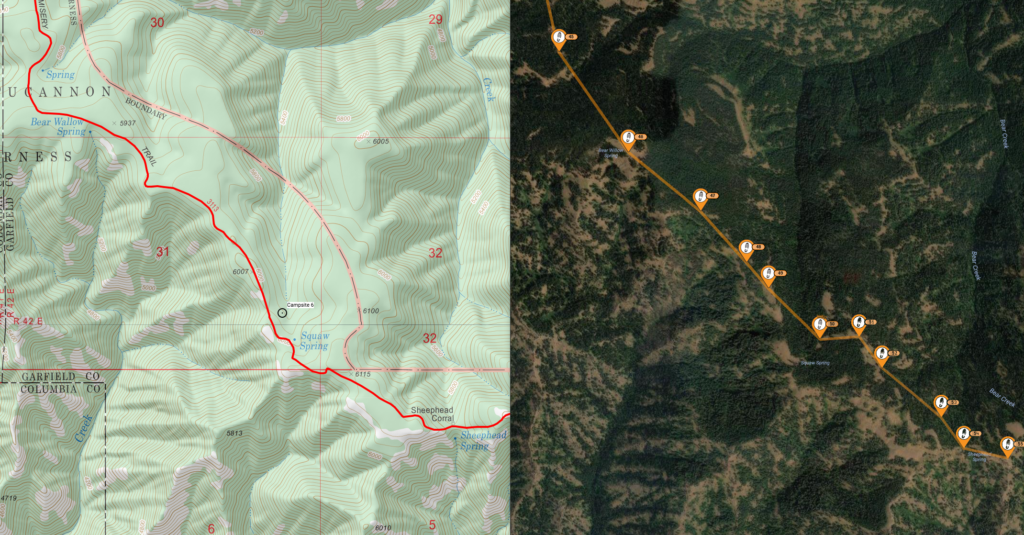 The group made steady progress in a generally southeasterly direction, passing Bear Wallow Spring, Campsite 6 (where they planned to decide whether or not to push through), Squaw Spring, and Sheephead Corral. They paused there, at Sheephead Spring, for lunch. I was enjoying watching this progress and feeling proud of my sons.

A bit later I checked back expecting more of the same and was shocked by what I saw: 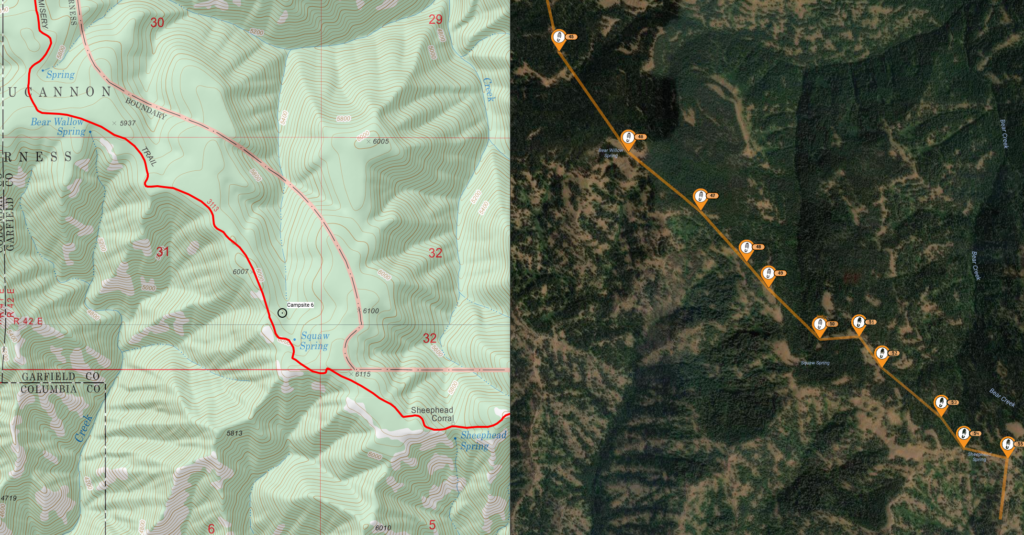 What?! Had the group descended a very steep ravine along the spring? My mind raced as I tried to figure out why they would have done this. To add to my concern, the device provided no further updates. (!!)

Finally, a few tense hours later, I received a call from the group. They were just fine and enjoying dinner at the closest town near the trailhead. They were blissfully unaware of SPOT’s anxiety-producing antics and weren’t sure what had happened. After a little discussion, they decided that the batteries in the device had drained to the point where, first, a false signal was transmitted, and then no signal at all. I sighed a huge sigh of relief, to say the least.

I reflected on this experience several times in the days and weeks that followed. I think the SPOT Gen3 device delivers on its promises, for the most part, glitch notwithstanding. I did experience peace of mind from knowing the group reached the next campsite safely each day. I was glad that I actively resisted the temptation to check more frequently. That felt wrong for some reason—too intrusive maybe, and also a way to get unnecessarily worried if progress seemed slower than expected.

I was curious if the experience of the Scouts was different so I spoke with my older son, Kyle, to get his perspective. He is the sort of backpacker who intentionally leaves his cell phone in the car at the trailhead, because he wants to be totally disconnected during the trek. (Some of his peers like to have their phones so that they can, for example, send an unexpected text message to the outside world if / when they get line of sight to a faraway cell tower from a high point on the journey.)

Kyle said he was conscious of the SPOT device but that he didn’t think about it often. The device does not make any noise and was carried inside one person’s pack, out of sight. He sometimes noticed peripherally the person with the device sending an explicit “we’re OK” message at the conclusion of each day’s hiking. He felt that the SPOT “takes away some of your privacy but it’s not in your face.” While he thought that the SPOT Gen3 device did not intrude significantly on his wilderness experience, he was also not enthusiastic about how it shared so much detail of their hiking rhythm.

We had two very different perspectives, representing two very different device usage scenarios, and between them, an example of some unintended outcomes of new technology. One could blame the failure mode of the device as not being properly thought through, and that’s probably true. As a remote observer, I couldn’t see the device status nor the Scouts’ situation. Improvements could be made to the whole experience for both the hiker and the home observer. The device could send a “batteries are dying – no further transmission until replacement” signal to the outside world and to the person carrying the SPOT.

One of my favorite tools for characterizing problems in an experience is UI Tenets + Traps cards. The cards help me articulate exactly what problems there are, which is the first step in judging their severity and priority to fix. The main UI tenet violated by the Gen3 device was that of Understanding, springing some combination of the Effectively Invisible, Uncomprehended Element, and Memory Challenge traps. The person who carried the Gen3 device either did not notice, did not understand the meaning of, or forgot the meaning of, the blinking red power light on the device (indicating low battery). One could also add the Feedback Failure trap, since relying on only a visual cue to communicate impending battery death probably does not make sense when moving on a trail.

Likewise, viewers of the website showing progress of the group experienced a combination of the Feedback Failure and Slow or No Response traps (the latter being a violation of the Responsive tenet). There was no indication that the device had stopped transmitting data, even after refreshing the site repeatedly.

Jeanine and I are teaching an open-enrollment workshop for UI Tenets & Traps in Seattle on October 14. I hope you can join us!

Beyond UI problems, this situation raised bigger questions for me. It brought up an interesting “is ignorance bliss?” question. I found myself drawn into worry and anxiety because I had more information than ever before but when the device suddenly stopped sending correct information, my imagination and fears ran wild.

With Kyle and Sean back home, I asked myself, “Is this kind of technology intrusion helpful?” Where I have landed, probably of no surprise to people who know me well, is with a nuanced interpretation—it’s good to know, but there is such a thing as knowing too much or too often. It would be interesting to try out a modified design that, perhaps, only transmitted at the beginning, middle, and end of the day; and perhaps also when the user explicitly sent an update / check-in. That, I think, would be more balanced and perhaps speak to Kyle’s slight discomfort with his privacy being interrupted by light voyeurism.

What do you think? Comments are welcome.

2 thoughts on “Balancing Safety and Solitude: A Wilderness Experience”