Small business owners are regularly confronted with decisions that threaten their livelihoods, often with meager, ambiguous information about the nature of the threat. Jim Hepper is the owner of Cascade Spray Service in Bellevue, Washington. His business began in 1980 as a traditional pesticide spraying service for commercial and residential properties but has evolved in recent years to be something quite different. We found Jim’s story inspiring because he stepped back and examined what outcome his work was producing and decided to investigate whether there was a different and better way.

Jim didn’t hang on to the way he had been doing things and didn’t let his ego get in the way. Instead, he bravely asked “How Might We?” We were also very impressed by Jim’s commitment to experimentation, continuous learning, and iterative improvement. The rest of this musing is a transcription of an interview we conducted with him.

Here’s how it evolved. I sprayed pesticides in yards for over 20 years. I was getting a little disillusioned with the whole thing. It never really solved the problem—just put Band-Aids on it. I had the same problems in the same yards, year after year, which was job security, but…

Way back when, people were happy to see you show up. Attitudes shifted, to where pesticides started to be a bad thing. I noticed when I would show up that, for my customers, I was becoming a necessary evil. I started looking around for something else I could do – get out of the yard care business.

I had a large account over in Laurelhurst, a big estate on the water. In 2002 or 2003, the landscaper said the owner wanted to go completely organic and asked me if I knew anything about “compost tea.” I said, “No, I didn’t” but that I would look into it. I got on the Internet and did some research. I found Professor Elaine Ingham down in Corvallis, who used to be at Oregon State University but started her own lab. She was promoting soil biology and compost tea was part of it.

A little lightbulb went off: This is a better approach! It’s like with us – if we eat well and take care of ourselves, you don’t get sick. With plants, if you can get them the nutrition they need, they stay healthy, and bugs don’t pick on them. Bugs and disease go to plants that are stressed out, for one reason or another. It’s nature’s way of recycling.

I got really interested in her courses. I think you can take her core curriculum in a week or two these days, but back then, she was still developing it, and each course was 4 or 5 days. I stayed a week at a time in Corvallis to learn about soil biology, composting theory and practice, compost tea science and practice, and using a microscope, so that I could take samples of my tea and know what I was looking at—whether I had a decent batch of tea or not.

Once I had the knowledge from the coursework it took me about a week and a half to purchase all of these things and get ready. I felt I knew just enough to get up and running. I also bought another truck. I found a tank for it over in the Tri-Cities. I found out about a guy in Redmond who was “brewing” (as it’s called) compost tea. I met with him and bought one of his brewing setups. I re-engineered it a bit and shared the improvements back with him. We’ve become good friends and we share a lot of tips and results with each other.

After about a year of learning, I made my first batch of tea, sent it to Professor Ingham’s lab and got a thumbs-up, so I started with just that one account in Laurelhurst. That landscaper led me to a few more accounts and just started going from there. It was a steep learning curve. I had guidelines to work from, not specific recipes, so there was a lot of trial and error, learning as I went.

The tea is brewed in a big 100-gallon vat, with a big mesh bag suspended in it that has specially-made compost in it. I started with compost that I purchased from the fellow in Redmond. Then I sourced several others and brought those in. Before too long, I started making my own vermi-compost, meaning worms work through the compost, breaking things down. I have a big worm bin in my shop.

It’s a 24-hour brew cycle. The three main things I’m try to grow are bacteria, fungus, and protozoa. The biology moves out of the bag into the solution and foods are introduced into the solution. Bacteria can double every 20 minutes, so it doesn’t take long to go from thousands to millions. When you get a bacterial growth spurt, which is sometimes more like and explosion, the oxygen levels will dip. You don’t want your oxygen levels to drop below 6 parts per million, so I bought an oxygen probe and hooked it up to an old computer. I set it to check every six minutes. Oxygen is pumped in through tubes into the bag and the bottom of the tank. I reviewed the graphs in the morning to make sure nothing went sideways while I was asleep.

While developing the tea was still a work in progress, I started working on my regular customers, touting the new approach to things, to encourage them to switch over to the new approach. For about a year, I had two trucks. I’d go out and “save the world” one day and then switch trucks and spray chemicals the next day. It finally got to a point where the money made sense to do the compost tea full time. I spoke to my remaining chemical customers and told them they had to switch or find someone else. Everyone came over except two. I made everyone a guarantee: if you have a big insect explosion or outbreak, I’ll come in and shut it down for free, which gave them piece of mind. And, the compost tea was more expensive so they were paying me more. The guarantee helped customers go along with the program.

All of the problems I saw year after year in customers’ yards slowly went away. There were a lot of factors—the shape the yard was in overall, whether the owner was watering in the summer, the weather.

It’s been about 15 years now. I am still learning. Each winter, I try to find new seminars on soil biology and health. Almost all of them have to do with farming and I’m usually the only non-farmer to attend. It’s usually not too hard to extrapolate the concepts to yards. 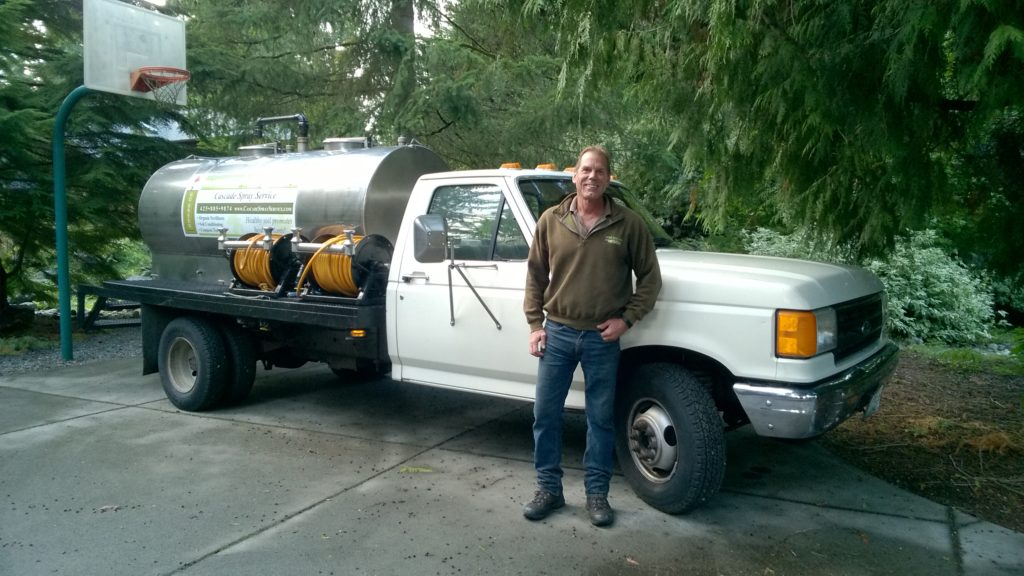 Philosophy of learning and perseverance

Even when I was spraying pesticides, I was always looking for a better way to do it—trying new things and talking to people. Being in business for myself—you always want to be the best—or at least, I do. I strive to be. I might not always be, but I try to. It came to a point where spraying the pesticides didn’t feel right. I was forcing things. I could see the handwriting on the wall. There is a sprayer’s association and I used to go to their monthly meetings with the owners of all the other companies. There was a dinner and a speaker.

When I started to go into compost tea, most of them thought it was “snake oil” and I was the butt of the jokes quite a few times but I just stayed with it… And now they’re all pretty much trying organics. There are companies out there that still spray pesticides but it’s not the preferred route. On the other hands, there are not that many people that do everything I do [brewing and experimenting in particular] because it takes a lot more time and thought. Plants respond differently to ingredients so I do a lot of customization. Landscapers tend not to get into this because they pretty much have to dedicate one of their guys full time to do it.

There is a lot of experimentation and I write down what I put into every batch. I vary ingredients based on the time of year but I am always looking to see how things went since the last application. You have to look for trends. And, not every customer tends their yards the same way. Some are more wild – a natural setting – while others are more manicured. Some people water consistently in the summer, some are more lax… You have to take all of this into account.

I’m pretty set now on things I’m comfortable—the basics—with but I am still learning. In fact, I just sourced some different compost to see what it looks like, after talking to a salesman. I have some samples, and when it slows down this winter, I’ll run some batches and see what it looks like. My yard is the “experimental zone”. I try different materials there, which is food for the microbes that you spray. So, my lawn goes from good to not-so-good. When it’s looking good, my wife says, “Why don’t you just leave it alone?” I’d rather try it here and have a “crash” than out there, on a customer’s yard. 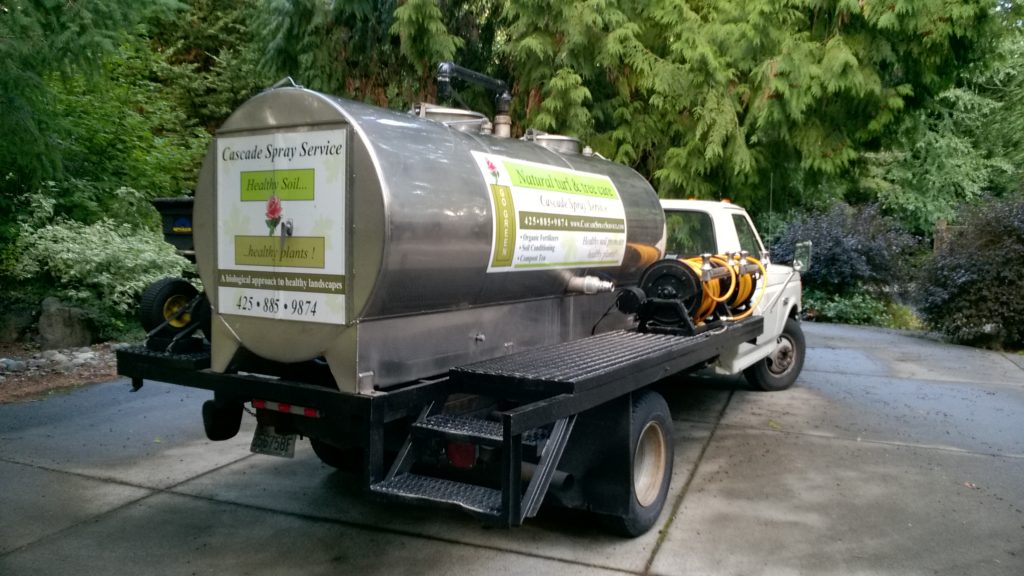